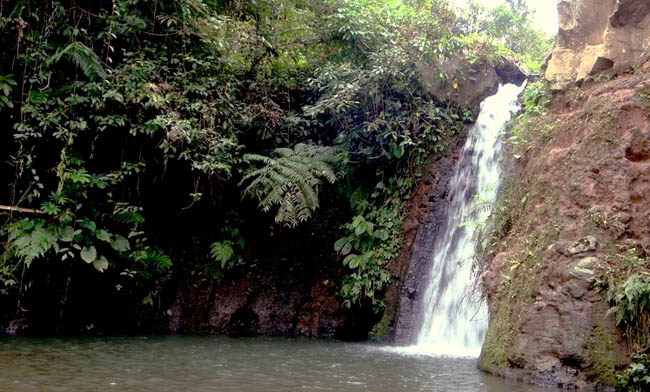 Some people disregard the importance of nature tourism. Well, they must be wrong. An opportunity to get close to nature and enjoy its serenity always satisfies everyone. For instance, people can visit Ulem-Ulem Waterfall in East Lombok Sub-District of Indonesia. To be exact, such peaceful falls is located in Keruak Sub-District and belongs to Tete Batu Village. It is the place where tourists can create a memorable experience during a holiday. Also, they can get away from routines and feel the peace of nature. Another popular activity to do in Ulem-Ulem Waterfall is to take a bath in the natural pond, which is also the feature of the site.

The Nuance
In terms of nuance, Ulem-Ulem Waterfall owns a pristine and peaceful atmosphere. The sound of the water feels so soothing and the pond feels rejuvenating! Near to the waterfall, a signboard resides and it is written by the locals. What is next? Apart from those features, the site is blessed with a beautiful panorama. Tourists can even see Rinjani Mountain clearly from there! Not to mention a formation of paddy farms are visible, creating a lucrative natural attraction.

Exploring Ulem-Ulem Waterfall
The most common activity to do in Ulem-Ulem Waterfall is relaxation. Tourists do not even need to do anything, simply sitting and watching the falls. Hearing the sound of the water makes them feel comfortable, in fact. Is it not enough? Tourists are allowed to get in the water and take a bath for several minutes. The fresh water makes them refreshed at once, for sure. It is said the water helps them to eradicate stresses, as well. One thing, no one is allowed to spoil the cleanliness of the water.

What is next? An exploration becomes the next fun activity people can do in Ulem-Ulem Waterfall. The fact is that the site features a protected forest, where tourists can explore. During the adventure, they may encounter several wild animals, especially black monkeys! Despite their naughty behavior, the animals have been used to the presence of tourists. That means they would show friendly gesture when people get near to them. Make sure to carry some snacks or peanuts to feed those monkeys, though.

Another popular activity to do in Ulem-Ulem Waterfall is photography. That means tourists simply take pictures of the falls or other objects like monkeys, lush trees, etc. As for precaution, make sure to wear proper footwear when exploring the site. It is because the landscape is slippery or wet, especially in the rainy season. For those who carry snacks or drinks, they must take care of the trash either.

How to Get There
It is easy to reach Ulem-Ulem Waterfall. From Mataram City in Indonesia, travelers only need to head to Keruak Sub-District in Indonesia. The distance is 47.1 km and it takes about 1 hour and 30 minutes. Once they reach Keruak, the next destination is Tete Batu Village. The whole trip can be done through Mataram Raya – Sikur Street, actually.