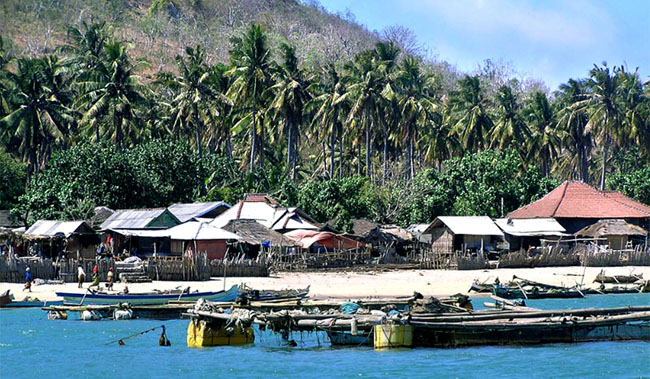 Visiting a beautiful island like Lombok is everyone’s preference when it comes to a holiday. It is because tourists can explore numerous types of vacation destinations including Gerupuk Village. The location is in the southern part of the island and it belongs to Center Lombok District, Indonesia Not only it offers interesting traditions, the village owns a beautiful beach which is also called Gerupuk. In fact, the most common reason to come to the village is to visit the beach (where tourists often conduct a family vacation and enjoy water sports).

The Nuance
Once tourists arrive at Gerupuk Village, they might feel a friendly atmosphere of the people. The locals would greet them with a smile and often offer some snacks to visitors. Some traditional houses are seen, but several modern ones are also available. When it comes to the main charm of Gerupuk, it is definitely the beach. Featuring big waves and strong wind, the sea becomes the best location to enjoy surfing! Even beginners are allowed to try the activity as long as they know the basics and can swim well. If not, they can simply explore the village and enjoy the culinary.

Exploring Gerupuk Village
Tourists can do many things in Gerupuk Village. The most common one is to approach the villagers and witness their culture. The locals are mostly fishermen and farmers, but some of them sell beautiful pearls as well. No wonder, some tourists come to Gerupuk to buy such beautiful things. Apart from the pearls, villagers sell delicious traditional foods especially Plecing Kangkung. Vegetarians would fall in love with it, for sure. Both the taste and texture of the food are splendid!

After exploring the village and try the culinary, tourists must visit the beach. As mentioned before, Gerupuk Beach is famous for the excellent waves. That means it suits the need of surfers the most, which is both challenging and amazing. In fact, 5 different surfing spots are available to try including Terasaq, Batu Lawang, Prigi, Giligoleng, and Batu Teong. Only experienced surfers are allowed to surf there, though. The reason is the waves are quite risky for beginners. For those who do not like water sports, they can enjoy hiking instead.

It is true Gerupuk Village also becomes a destination for hiking. A small hill resides near to the local settlement, which often becomes a place for sightseeing. After reaching the top of the hill, a breathtaking view of sea scenery and nature never fails to amaze tourists! As for the tip, everyone should carry a camera to take some pictures while on the site (before getting back to the village). Make sure to carry bottled water, though.

How to Get There
Gerupuk Village belongs to Central Lombok District, Lombok Island of Indonesia. That means it takes about 1 hour and 30 minutes from Mataram City, with the distance of 61 km. As for the best route, tourists can take Lombok International Airport Bypass Street.