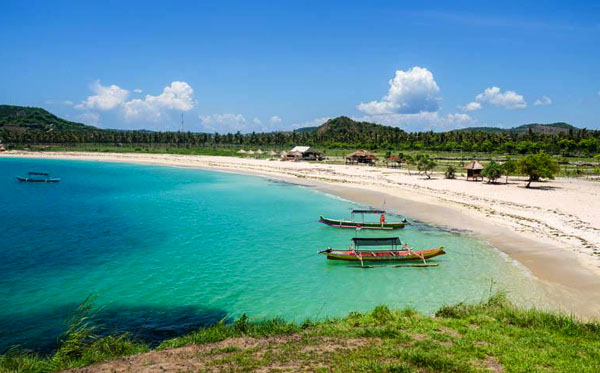 As a lot of people know Lombok has numerous beaches across its coast, most of them are very beautiful and some of them are still untouched. In the southern coast of Lombok, we can find some iconic beaches, one of them is Tanjung Aan Beach, the birthplace of the legendary princess Mandalika. Located approximately 75 km south of Mataram, it takes about one hour and a half drive from the city, and about 10 minutes from Kuta Beach. It is not really far from the main city and the road to the beach is very well built although the road is a little rough when we get closer to Tanjung Aan Beach. The access to the area is quite easy, and can be reached by cars or motorbikes. We could see beautiful farms and villages along the road while enjoying the view of nearby beaches and coconut trees.

This beach faces directly to Indian Ocean, and the coast is 2 km long. One thing that makes Tanjung Aan Beach is unique is the sand, the sand has bigger grain and people often called it “pepper sand”. Tanjung Aan Beach is a perfect place for those who enjoy to snorkel and to swim, because the waves are quite calm and the depth of the sea is quite shallow. If you don’t own or forget your snorkeling equipment, there are local boats which provide necessities for snorkeling or a tour across the coast. During the afternoon, the waves are getting higher so surfers can go to Tanjung Aan Beach to try the waves out. Across the coast, we can see some traditional straw woven huts and umbrellas. One of the way to enjoy Tanjung Aan Beach is by lay down under the huts or umbrellas while drinking coconut drinks and eat local snacks and meals.

Tanjung Aan Beach is also surrounded by some hills. These hills have a quite challenging track. It is a recommendation to climb it and see nearby beaches from up there. Locals call the hill Bukit Merese, Bukit itself means hill. During the climb, we can usually find herd of buffaloes which live quietly in the area. The green grass looks very unique and locals often compare it with the hills in New Zealand. On top of the hill we can also see nearby beaches such as Seger Beach in the west, and in the east, we can see Batu Payung and Gili Anak Anjakan from afar. Enjoying sunset from the top of the hill can also be a very unforgettable moment.

During the holidays, we can see a lot of local tourists in Tanjung Aan Beach. Meanwhile in February, we can see more of tourists from different areas of Indonesia and even from foreign countries. It’s very crowded during this month because there is a special traditional event called Bau Nyale. This ritual is the way to commemorate the legendary princess Mandalika, a princess who sacrifices herself by jumping off of the hill to keep the peace and unity in the kingdom. Afterwards, according to the myth that princess Mandalika reincarnated to be “Nyale” or sea worms. Nyale itself after being caught, will be cooked by locals.

How to get there:
Situated approximately 75 km from Mataram and only 3 km from Kuta Beach, you can reach Tanjung Aan using your own private car. It takes half and an hour from Mataram. The route you should remember is Mataram – Cakranegara – Kediri – Praya – Batuntale – Sengkol – Rambitan – Sade – Kuta and you have to continue till you arrive at Tanjung Aan. If you are coming from other cities and stop by at Lombok International Airport, you can take a public transportation to Sengkol. Then, you have to change to another angkot that will bring you to Kuta Beach in Kuta. As the previous information, it’s only 3 km from Kuta to get to Tanjung Aan.