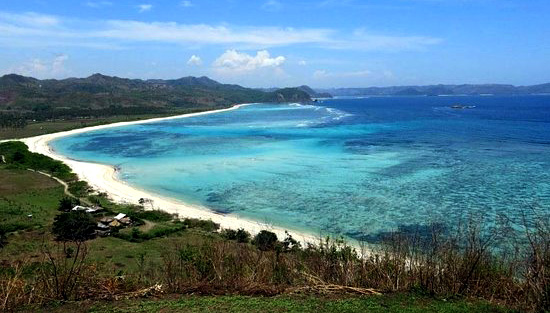 A calm and beautiful beach resides in Buwun Mas Village and the name is Pengatap. It belongs to Central Sekotong Sub-District and is chosen as an alternative to Senggigi or Mandalika Beach. To be exact, it is located in Raya Sepi Street located near to Torok Beach. So, what makes it unique? Tourists can find the local’s seaweed cultivation site there. Featuring such activity, the beach is considered merry and more crowded than other beaches in Lombok. It is a good thing, though. Tourists can get closer to the villagers and learn how to nurture seaweed.

The Nuance
Once tourists have arrived at Pengatap Beach, they would feel its comfort. The shallow and crystal clear water would welcome them right away! In the horizon, they can see a small island too which appears stunning. What is next? It is, without a doubt, the local’s seaweed cultivation site. Many containers of such sea resource are scattered on the beach and tourists can see them clearly. In fact, they are allowed to approach the site and watch the procedure by their eyes. Some local kids often come to the beach, as well. They come to meet their parents who are working on the cultivation site.

Exploring Pengatap Beach
Pengatap was once a peaceful coast, but it becomes more crowded recently due to the visit of tourists. It is because people are interested to see the activity of the seaweed farmers directly. Even though tourists come during the working days, they are likely to meet other visitors on the site. Have no worries. No one feels uncomfortable when spending a vacation in Pengatap. Thanks to the pristine water and comfy wind. Even the weather is nice at noon, featuring warm Zephyr.

Apart from witnessing the activity of the seaweed cultivation site, tourists can simply enjoy relaxation. The small waves flow slowly and create a soothing sound. No wonder, the beach feels peaceful despite the crowded nuance. As for the tip, the best time to visit Pengatap is in the morning where a number of visitors is low. Not to mention the atmosphere feels more comfortable at the time. Another reason is that tourists can avoid the heat of the sun that makes them uncomfortable during the exploration.

Another charm of Pengatap Beach is the presence of an ancient tomb that belongs to Inaq and Amaq Bangkol. The tomb was built as the suggestion of Muhajirin Praya and now has become another reason why more visitors come to Pengatap. Tourists believe that the tomb may grant prays related to prosperity and happiness. The tomb is located under the nearby banyan tree, which is about several hundred meters of the shoreline.

How to Get There
The beach is located in Buwun Mas Village. From Mataram City, travelers need to go to Central Sekotong Sub-District first. Next, they can directly head to Buwun Mas Village which takes only several minutes. From the site, they need to walk for about 10 minutes to reach Pengatap.