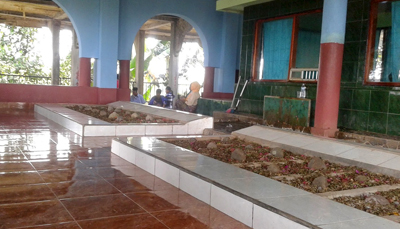 It is true Lombok Island is known for beautiful beaches and flawless nature. Do not be biased, though. The island also features other types of attractions, including sacred tombs. As for the reference, it is Ketaq Tomb. The location is in Lopan Village and it belongs to Kopang Sub-District. It is the tomb of Tuan Guru Lalu Moh Saleh, actually. The person had a significant influence on the people of Lombok and he died at the age of 132. Many locals also called him Datuk Lopan and buried him in Lopan. Today, the tomb becomes attraction both for the locals and outsiders.

The Nuance
Unlike other sacred tombs in Lombok Island, Ketaq Tomb is considered well-maintained. The local government had included some facilities to the site as well. Not to mention tourists can find many local vendors on the site, selling snacks and drinks. The site also features stairs that lead to the tomb. That means visitors should pass through it and give some efforts to visit the tomb. Well, it is indeed a little bit tiring but it is quite rewarding. In terms of appearance, the tomb looks regular but emits a strange aura!

Exploring Ketaq Tomb
Ketak or Ketaq Tomb has been included in the prime list of religious tour destinations in Lombok Island, especially in Central Lombok Regency. Despite the secluded location, the site always gets visitors even in working days. Not only people come to the site for a religious tour, but they also come for a family vacation. They believe that a prayer would be more powerful if it is done together with their family members or friends.

The thing is visitors should learn the procedure of worshipping when they come to Ketaq Tomb. Wearing clean and neat attire is a must, for sure. The next thing to pay attention is the attitude. Everyone should not act carelessly when entering the area of the tomb. At least, they should not make noises or disturb other visitors. After worship, the next thing to do is to wash the face with sacred water provided by the locals. The sacred water (Rampe) is mixed with local flowers, actually.

Even though most of the visitors are Muslims, people who have a different belief also come to the site for worshipping too. Despite the difference in belief, people have the same purpose when it comes to visiting Ketaq Tomb. They want to look for the blessing from God through such famous person. As for another tip, tourists should come with enough money as they are going to use it to buy some drinks or foods during the visit. It is because the temperature becomes too hot at noon, making them uncomfortable.

How to Get There
As mentioned earlier, Ketaq Tomb is located in Kopang Sub-District. For those coming from Mataram City, they need to spend about 1-2 hours to reach the location. The distance between those regions is 36.4 km and tourists can take Raya Mataram Street.