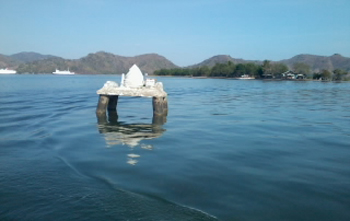 Perhaps some tourists have recognized a beautiful vacation destination located in Lembar Sub-District, which is called Cemare Beach. However, not many of them know about the presence of sacred tomb that resides near to it. The locals named it Cemare Tomb and it has been visited by people over time, especially to conduct a religious tour. In fact, it has a similar function to that of Wali’s Tombs! As for tourists, the tomb becomes an additional attraction when they are exploring the beach. Not to mention they have an opportunity to pray on the site, wishing for both prosperity and good luck.

The Nuance
The fact is that the tomb is located in the middle of the sea. The size is small and the color is white. This explains why tourists need to take advantage of a boat in order to reach the tomb. Have no worries, the waves are peaceful so everyone can get to the tomb safely. The next important fact is that the tomb has been there for hundreds of years and the locals have been taking a good care of it. Not only the tomb, can tourists find a small mosque used for worshipping on the location (in the shoreline).

Exploring Sacred Cemare Tomb
Sacred Cemare is one of the historical tombs owned by West Lombok Regency including Loang Balok, Beroro, and Batu Layar. Despite lacking popularity, the tomb keeps luring new visitors as the time goes by. Here is an important tip regarding a visit to Cemare Tomb. Tourists should come at the right time, which is usually between June and August. It is the time when the locals have done the harvest and want to show gratitude to the god. It is called “Syukuran” in local Language, actually.

According to the locals, Sacred Cemare Tomb belongs to one of the famous religious people in Lombok. However, no one knows the name of such person. Despite lacking information, visitors have no doubt in visiting the tomb. They want to pray or look for inspiration, hoping good things for their life. Not only the tomb is visited by the locals, but many people come from outside Lombok Island too. Once they arrive at the tomb, they would take some water and bring them back home after worshipping.

Before visiting Sacred Cemare Tomb, tourists should pay attention to several things though. For instance, they need to prepare some money either to rent a boat or buy some necessities during the trip to the site. Next, they need to come with a guide in order to learn the procedure in visiting the tomb. It costs more money, but the trip becomes easier and more efficient.

How to Get There
From Mataram City, a trip to Lembar Sub-District takes about an hour and the distance is 17.1 km. Once reaching Lembar, travelers only need to head to Cemare Village through Gajah Mada Street. Later, it takes a boat to approach the tomb as the location is in the middle of the sea.