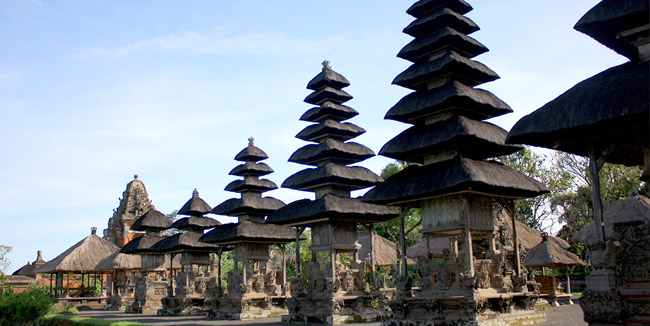 A grandiose temple resides in Lombok Island and it is called Meru. Due to its popularity, tons of travelers have visited it over time. The fact is that the temple is the biggest in Lombok and it had been built in 1720. This makes Meru the oldest, as well. So, where is the location? The temple resides in Selaparang Street, Mataram City. It belongs to Cakranegara Sub-District and has been chosen as the prime attraction of the region. Apart from being a tourist attraction, the locals visit it to worship the major gods in Hinduism – Vishnu, Brahma, and Shiva.

The Nuance
The temple was built in 1720 and the builder was Prince Made Larang. In terms of size, it is definitely big and features unique architecture. The roof consists of several levels which are similar to a pagoda. According to the locals, the structure was built by 33 villages in the 18th century and the idea came from the prince. 3 temples reside on the location and the prime one is called Utama Mandala. When it comes to the location, it is quite accessible and located near to a famous park called Mayura.

Exploring Meru Temple
As mentioned before, the most important one among the three temples of Meru is Utama Mandala. Not to mention it is the most sacred as compared to the others. Inside, tourists might see holy items called Sanggah. There are 33 of them, which represent the 33 villages that built the temple. Another unique characteristic is the levels. The prime temple consists of 11 levels while the other twos only have 9. Utama Mandala also becomes the prime temple used for worshipping, especially among Hindu people.

Even though Lombok Island is inhabited by mostly Muslims, the presence of Meru Temple proves that the difference in belief does not separate people. In fact, many Muslims often visit the temple to spend a holiday with their families. Instead of worshipping, they come to the site to conduct other activities like relaxation and photography. Thanks to the present of Sekepat (traditional gazebos). Visitors can use them to sit and relax during the visit. Moreover, Sake Ulu (gazebos with 8 pillars) is also available there.

While Utama Mandala is used mostly for praying, the other twos (Madya and Nista Mandala) are used for hanging out. Sometimes, the locals conduct traditional performances and ceremonies too on the location! Thus, tourists should come at the right time, especially when the attractions are performed by villagers. After exploring the temple, the next recommended activity is to visit nearby souvenir stores and buy some items with a cheap price. Have no worries. The products are negotiable.

How to Get There
From Mataram City Indonesia, travelers can take Pejanggik Street and head to Cakranegara Sub-District. It takes only several minutes and the distance is approximately 4.8 km. Later, they need to head to Selaparang Street where the temple resides.